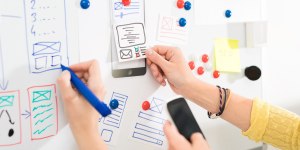 Gregg Vanderheiden, Professor and Director of the Trace R&D Center at the University of Maryland’s iSchool, delivered the keynote address at the 22nd International Conference on Human-Computer Interaction. He highlighted a growing gap between current UI and UX design and people who have low “digital affinity,” and proposed an alternate approach to accessibility and extended usability for next-next generation UI/UX.

Insight into this problem came from work at the Trace R&D Center on development and pilot testing Morphic, an open-source extension to the Windows operating system intended to make computers easier for people to use.

Dr. Vanderheiden described what he called next-next-generation interfaces that would be appearing in 15-20 years, involving the use of an open-source public Info-Bot.